Safety Precautions are one of the more important things that will have to be followed in order to remain safe in the work environment. In this field working with machinery, the standards for remaining safe are almost crucial. On an ethical stance, the person operating on anything mechanical will follow certain protocol in order to fulfill his/her task. That being said a person operating or doing anything for that matter will have to be wearing certain glasses that protect against whats being done. There are various others like, using the right gloves, not using electronics while operating and so on and so forth. These guidelines for safety will at least try to keep people safe, and as a person operating, whether he/she follows the guidelines not only shows the ethics in the work place but it will also show responsibility and understanding.

Work Environment
The work environment and the gender ratio is another thing to mention in the field of engineering. It is said that the engineering field is male dominated and so with that in mind the ethics of gender equality should be something to be taken seriously and equally. Both men and women  have to follow the ethics that are to treat everyone with respect, equality, etc... in the working environment in order to create a good community among fellow engineers but also simply to be able to feel comfortable in a job without having to worry about discrimination and other factors.

The Code of an Engineer

The code on engineering as mentioned is that "Engineering is an important and learned profession. As members of this profession, engineers are expected to exhibit the highest standards of honesty and integrity. Engineering has a direct and vital impact on the quality of life for all people..." 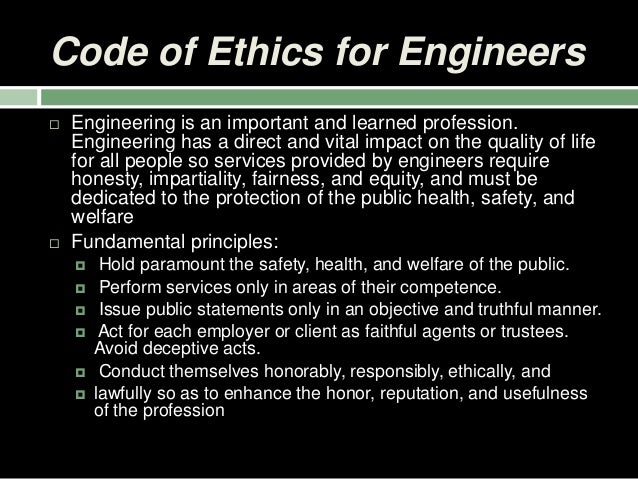